Presenting to the World—

A Constitution for Permanent Peace – The Ultimate System for Humanity

Question 1: What should I believe? (One of the three big questions of philosophy)

1. "It is jealousy and lack of confidence which prescribes limited constitutions, to bind down those whom we are obliged to trust with power. Our Constitution has accordingly fixed the limits to which, and no further, our confidence may go.’—Thomas Jefferson: Draft, Kentucky Resolutions, 1798.

2. Believe in the rule of law and science. Do not believe in the great jurists who compose to act in concert with "dictator's voice", the big entrepreneurs who acclaim for the "profit concession of the authoritarians", or the politicians, media and scholars who fawn on "the smile of the totalitarian" - they are the beneficiaries of the accomplice structure.

3. One aspect of my beliefs can be found in the book "Why Nations Fail": Everything goes back to the system. I believe that the "inclusive system" trumps the "exclusive system" expounded by authoritarian dictatorships. It offers a fundamental way out for individuals and nations by eliminating the subject conscious of reliance on “wise emperors" and “honest bureaucrats", and break through the concept of rule of man that beliefs in “Acts cannot be exercised by oneself”. It is the way out for any individual as well as the nation.

4. When values are determined by others, they will be taken away by others. Only values that are determined by oneself cannot be taken away. Letting others decide your constitutional values means giving your soul to others to dominate your body. You are the master of your destiny, you are the commander of your soul. Constitutional amendments must be decided by yourself.

5. Comparison will determine the better. The comparison method is an invincible tactic. Thus, we believe in the human wisdom accumulated over thousands of years. Trust your eyes and hands, use your mobile phone and ask questions, and you will find the basis of the rights that protect your dignity and values. Choose the most favorable law around the world (provided by the association) for yourself, manage your constitutional guarantors payed by your taxes according to the constitution, and enhance the value of yourself and the country.

6. I believe that [the State] is a beacon of democracy. More than 10 million people travel across the Taiwan Strait each year. There is no language or cultural barriers, meaning that the people of [the State] are in a unique position to break through the CCP's internal information blockade and lead the Chinese people to democratize. When that happens, permanent peace will be achieved. The long river of history inundates all empires. As long as you believe in the wisdom of the rule of law of all human beings, you can transform the destiny of the nation-the family-the person. You can turn the tables and contribute to the world.

Question 2: What may I hope? (The second big question of philosophy)

A: You can have your own dreams, national dreams, and world dreams based on the Charter for Permanent Peace:

1. Believe the first part - preparation clause - seventh item, about self-actualization: you are the master of the country; also the navigator who creates freedom, democracy, human rights, rule of law (for details, §1 ~ §4); and lifelong holders of sovereignty in legislation, administration, procuratorate, and judiciary (§5~§8).

2. Rolling reform and standardization (Figure3). Many of the advantages of this charter are not found in the laws of other nations, and shortcomings in the laws of other nations will not occur in this charter. The articles guarantee that you are the beneficiary of universal values and show that everyone will achieve self-actualization, live and work in peace, and prosper through generations. It will let you enhance the world and see beyond the past and the present. The country is great because of you, and the world is peaceful because of you. 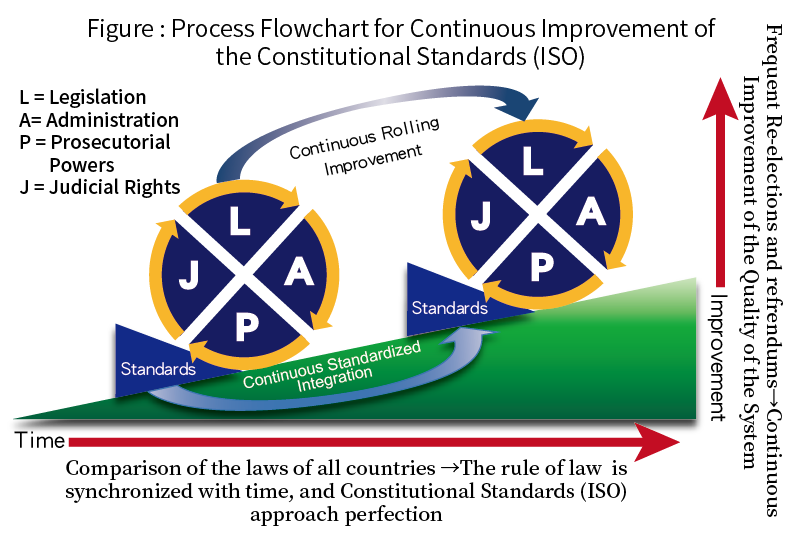 3. For the time being [Taiwan] is not able to function as a normal country and take part in international organizations; but as soon as it can act as a supra-national government and assume its calling as a savior of freedom and democracy, it will be the Capital of Unity and the sun of peace, and you will shine as well, wherever you go.

4. If the people of [Taiwan] cannot make the transformation to this supra-national level, they are no more than a group of scarecrows without the soul of a nation].

Question 3: What ought I do? (The third big question of philosophy)

A: The Constitution is the fundamental law of the country. The right of Constitutional amendments will always belong to the people unconditionally. As long as you support the demonstration of the Charter for Permanent Peace, every signature of the petition is a sacred light:

1. Autocracy is always the enemy of human peace. Constitutional reforms promoted by those in power always usurp the power of the people. Constitutional amendment is absolutely the right and obligation of the people alone. As Kant had pointed out, "The pursuit of permanent peace is the highest goal of rationality and a moral obligation."

2. This Constitution is not an unattainable ideal, nor is it Utopian socialist theory. It is a fundamental great law that can be applied immediately and which all countries can follow. It is a fundamental system to save countries without complete democracy, and rescue our human civilization from the destruction of nuclear war.

3. People from different regions, of different cultures, races and nations all live on the same planet. Therefore, we all have the right to launch the implementation of "permanent peace". As long as you sign up to support the [Taiwan] Model of the "Charter for Permanent Peace ", the Charter itself will lead the nation to move forward courageously, attracting the world to follow bravely. Without taking any military actions it will stir up a tremendous wave of global democratization, saving the more than half of the world population now living under oppression, and eliminating dictatorships and nuclear and chemical weapons forever.

4. Constitutions are fundamental laws for governing life, the nation and mankind. They are written guarantees of human rights and state power, as well as an amulet for the human body and the state. Ensuring that everyone can control their own destiny as part of the national movement is an obligation that constitutions cannot change or overlook. Constitutional power is always with the people and with God.